This section describes the rationale behind the opinionated pipeline. We go through each deployment step and describe it in detail.

Spring Cloud Pipelines provides scripts, configuration, and convention for automated deployment pipeline creation for Jenkins and Concourse with Cloud Foundry or Kubernetes. We support JVM languages, PHP, and NodeJS. Since SC-Pipelines uses bash scripts, you can use it with whatever automation server you have.

Spring Cloud Pipelines comes with bash scripts (available under common/src/main/bash) that represent the logic of all steps in our opinionated deployment pipeline. Since we believe in convention over configuration, for the supported framework and languages, we assume that the projects follow certain conventions of task naming, profile setting, and so on. That way, if you create a new application, your application can follow those conventions and the deployment pipeline works. Since no one pipeline can serve the purposes of all teams in a company, we believe that minor deployment pipeline tweaking should take place. That is why we allow the usage of that sc-pipelines.yml descriptor, which allows for provide some customization.

From the pipeline visualization perspective, we have prepared templates for Concourse and Jenkins (through the Jenkins Job DSL and Jenkinsfile). That means you can reuse them immediately to visualize a deployment pipeline. If you use some other tool for continuous delivery, you can set the visualization yourself and reference the bash scripts for each step. In other words, Spring Cloud Pipelines can be reused with any continuous delivery tool.

This repository can be treated as a template for your pipeline. We provide some opinionated implementation that you can alter to suit your needs. To use it, we recommend downloading the Spring Cloud Pipelines repository as a zip file, unzipping it in a directory, initializing a Git project in that directory, and then modifying the project to suit your needs. The following bash script shows how to do so:

To keep your repository aligned with the changes in the upstream repository, you can also clone the repository. To not have many merge conflicts, we recommend using the custom folder hooks to override functions.

As the following image shows, Spring Cloud Pipelines contains logic to generate a pipeline and the runtime to execute pipeline steps. 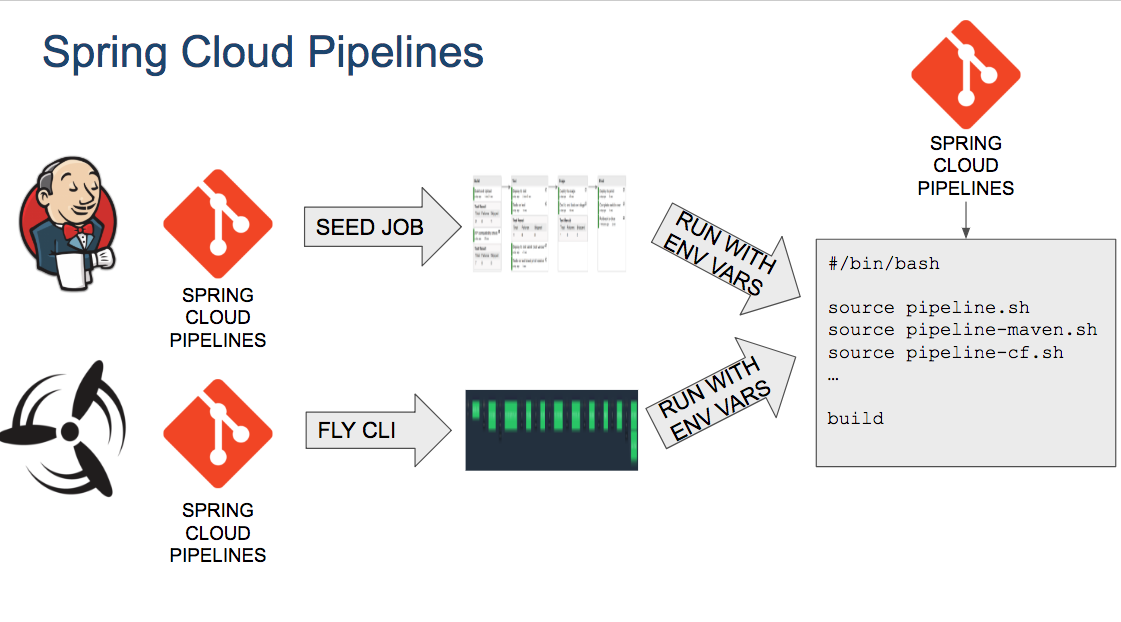 Once a pipeline is created (for example, by using the Jenkins Job DSL or from a Concourse templated pipeline), when the jobs are ran, they clone or download Spring Cloud Pipelines code to run each step. Those steps run functions that are defined in the commons module of Spring Cloud Pipelines.

Spring Cloud Pipelines performs steps to guess what kind of a project your repository is (for example, JVM or PHP) and what framework it uses (Maven or Gradle), and it can deploy your application to a cloud (Cloud Foundry or Kubernetes). You can read about how it works by reading the Chapter 2, How the Scripts Work section.

All of that happens automatically if your application follows the conventions. You can read about them in the Chapter 4, Project Opinions section.

Currently, we support the following languages:

You can use Spring Cloud Pipelines to generate pipelines for all the projects in your system. You can scan all your repositories (for example, you can call the Stash or Github API to retrieve the list of repositories) and then:

1.2.5 A Pipeline for Each Repository

For Jenkins, you need to either set up the Jenkinsfile or the jobs by using the Jenkins Job DSL plugin in your repo. Then, in Jenkins, whenever you set up a new pipeline for a repository, you can reference the pipeline definition in that repo. For Concourse, each project contains its own pipeline steps, and it is up to the project to set up the pipeline.

The following images show the flow of the opinionated pipeline:

We first describe the overall concept behind the flow and then split it into pieces and describe each piece independently.

This section defines some common vocabulary. We describe four typical environments in terms of running the pipeline.

We typically encounter the following environments:

We typically encounter the following kinds of tests:

Before we go into the details of the flow, consider the example described by the following image:

In the case of microservices, the scale starts to be a problem, as the following image shows: 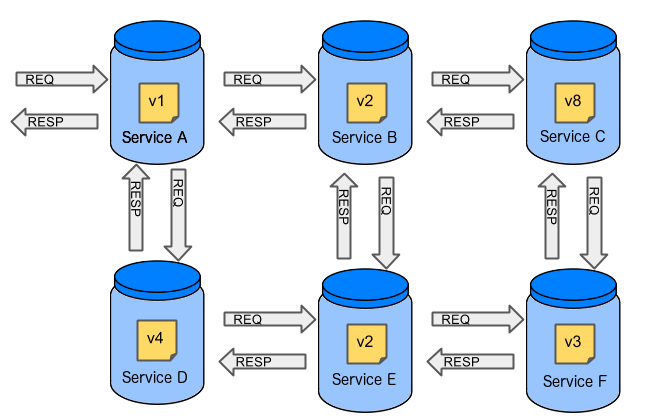 One of the possibilities of tackling these problems is to not do end-to-end tests.

The following image shows one solution to the problem, in the form of stubbed dependencies:

Figure 1.6. Execute tests on a deployed microservice on stubbed dependencies 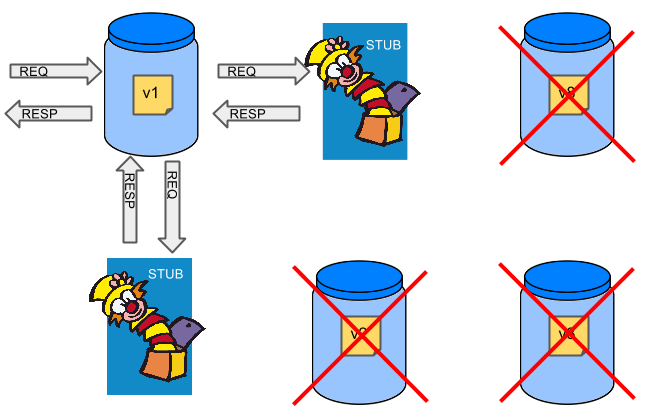 If we stub out all the dependencies of our application, most of the problems presented earlier disappear. There is no need to start and setup the infrastructure required by the dependent microservices. That way, the testing setup looks like the following image:

Such an approach to testing and deployment gives the following benefits (thanks to the usage of Spring Cloud Contract):

However, this approach brings the following challenges:

As with every solution, it has its benefits and drawbacks. The opinionated pipeline lets you configure whether you want to follow this flow or not.

The general view behind this deployment pipeline is to:

The pipeline could have been split to more steps, but it seems that all of the aforementioned actions fit nicely in our opinionated proposal.

Each application can contain a file (called sc-pipelines.yml) with the following structure:

For a given environment, we declare a list of infrastructure services that we want to have deployed. Services have:

When deploying to Cloud Foundry you can provide services of the following types:

The following example shows the contents of a YAML file that defines the preceding values:

Another CF specific property is artifact_type. Its value can be either binary or source. Certain languages (such as Java) require a binary to be uploaded, but others (such as PHP) require you to push the sources. The default value is binary.

A Single Project is a project that contains a single module that gets built and packaged into a single, executable artifact.

A Multi Module project is a project that contains multiple modules. After building all modules, one gets packaged into a single, executable artifact. You have to point to that module in your pipeline descriptor.

A Multi Project is a project that contains multiple projects. Each of those projects can in turn be a Single Project or a Multi Module project. Spring Cloud Pipelines assume that, if a PROJECT_NAME environment variable corresponds to a folder with the same name in the root of the repository, this is the project it should build. For example, for PROJECT_NAME=something, if there’s a folder named something, then Spring Cloud Pipelines treats the something directory as the root of the something project.